On Friday I had the apartment for myself, so I decided to spend the evening watching three different series and painting my nails. This really is my way of having me-time! 😀 I had come across marble nails a few times on Pinterest and I really wanted to try it! It looked harder than it actually was and the results are really cool! 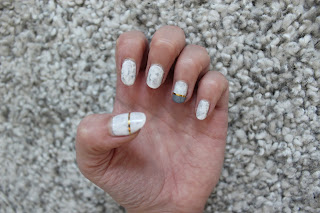 As I’ve said I haven’t had this idea all by myself. I got the idea from LuLus super useful tutorial (which you can find here) and tried a bit how it could work with me. I haven’t made pictures of each step because it was too dark when I was nailarting, so for a visual view on the tutorial I advise you to check out their blog post. However, if you want to know my take on it, here’s how I did it:
I started with a white base and let it dry completely. I then put grey nail polish on some plastic foil and dabbed it onto my nails. Afterwards I dipped some grey nail polish in a plastic bowl, sprayed some hair spray on it and put my nail in it. I repeated this step for every nail. I made the grey polish look less harsh by dapping a pencil in nail polish remover and removing some of the grey polish. So far I followed the steps from LuLus’ tutorial. However, it wasn’t as pretty as I had imagined. So I added some other steps.
After those previous steps I put some white polish on another piece of plastic foil and dabbed it on my nails. This made the nail art less harsh. Then I took a pencil and put a little bit of white polish on it. The first streak was placed on a piece of paper, the next on the remaining harsh parts of the grey polish. This all made the nail art less harsh and prettier, according to me. This is the result: 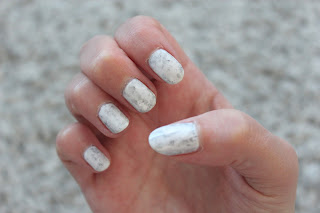 I spiced it up a bit by adding a colorblocking grey part on my ringfinger and some golden striping tape. Small changed, but so effective to spice it up! 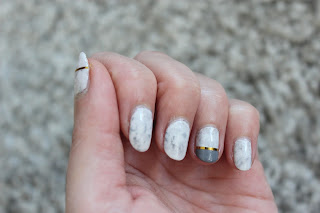 Have you ever tried the marble nails trend? 😀