Life’s been quite hectic lately: next to starting a job, I started running again and it became Summer, meaning weekends are jammed with seeing friends and enjoying the sun (if there is any, of course). It’s a constant juggling of everything, arriving late to some things or staying late at other things. But hey, with a splash of sunshine, that’s exactly how I like it! 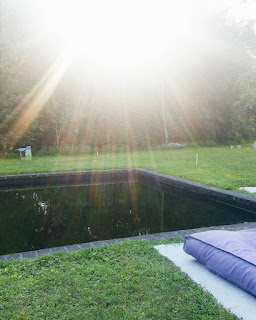 First of all, I got a new job. I’m now a Digital Marketing Assistant and I get to make newsletters, write blog posts (yes!!), create digital reports etc. It’s for a firm where they sell the stuff for hairdressers and beauticians, so this industry really is my cup of tea! 😀 Also, the colleagues are lots of fun, which is also important in a job. Yep, I love it there!
Next, the running. I’ve taken up running again, but until the end of June I could only run for about 8, 9 kilometres. The people I run with differ: some can run quite good, some can run really good. Those last ones would run like 9km was nothing, so sometimes I felt so bad at running… Thanks to my new job I could run better though. It’s 10km from the appartment to the job, and I can get there by bus or by bike. Whenever the weather’s good, I just go by bike. That’s 20km (or 1 hour) I kind of work out. I believe that’s the reason I suddenly could run 12.5km last week. I could never imagine I would be able to run this far, and this without even proper preparations! As I’ve said, it’s Summer, i.e. it’s too hot to run, my friends are travelling, my friends and I make too much plans, etc. I haven’t been able to work out properly, but thanks to my bike rides my running still improved! I felt SO proud when I finished that last run! 😀
Some more about it being Summer now. I haven’t gone on a holiday, since I just started working in June and it’s kind of weird to ask immediately if I could have holidays. I don’t really miss it, because we’ve had some sun in Belgium (not constantly, but still.) and I’ve spent quite some time in it. If the weather’s good, the boyf and I just sit outside to have dinner. If the weather’s good in the weekend, we can’t stay inside and go walking, or go to a lake, or go anywhere. We ♥ the sun. 😀
Summer also means a 10-days city festival in Ghent. It was the first time the boyf and I could enjoy it while living in the city and that’s SUCH a big difference! No parents saying “You’re going AGAIN?” when you’ve only went once. The weather was also really good, and there were not as many people as last year, so there was actually room to breathe. 😀 Plus, there was a long weekend, so we went four days (and nights) in a row. It was really awesome!
Then there are the usual weekens, filled with meeting friends, eating good, visiting family. However, a splash of sunshine and the feeling of Summer always make everything feel a little more fun. Summer lover over here!

Well, that’s what I’ve been doing lately. How are you? 😀