Update on one of my dreams! Remember when I told you about my dreams for 2015 how I wanted to make a road trip? In September I finally made one! 😀 We spent a week in France, where we stayed three days in Arles and four days in the Ardèche region. Being able to drive around in a car made our trip so much easier! 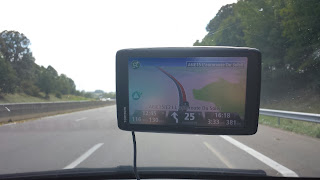 At the Autoroute du Soleil! 😀
Making a road trip allows you to pass through places and see things you would otherwise not have seen. While heading to Arles we came across an “aire” which had a museum and a watchtower. This view over the highway was our reward for taking a rest there. 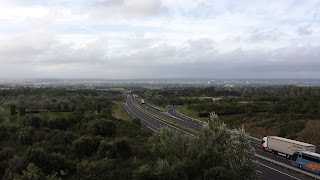 We started our trip with our headquarters in Arles. Arles is a tiny city with a nice historical centre. In one day you’ve seen all of the most important monuments, but it’s an awesome base to visit the region. 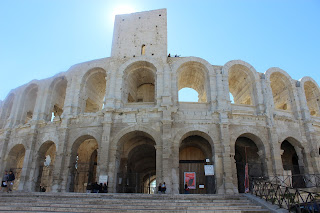 The second day of our trip (well, if you don’t count the full day of driving to Arles) we headed to the Camargue region, where we passed the day mountainbiking and looking for flamingos. 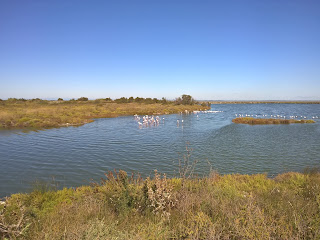 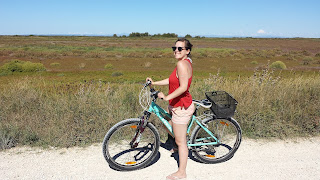 Then it was time to change bases and go to Vallon Pont d’Arc, a small, but highly popular spot for campers in the Ardèche region. I had never heard of, but apparently my grandparents had had their holidays there when they were 30 or so. :p Again this was a perfect base to travel around by car. On our way to Vallon Pont d’Arc we made a detour past the Pont du Gard. 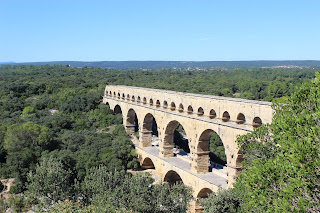 Arriving in Vallon Pont d’Arc we had to look for a camping. The one we had found had suffered from a storm the week before so they couldn’t accept tents. We then visited at least ten campings but they were all closed. Apparently most campings are open until half September… We found one that is the whole year open where we could place our tent with view on the river. 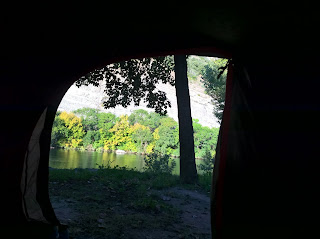 On our first day in Vallon Pont d’Arc we went to Aven d’Orgnac and the Bois de Païolive. The Aven d’Orgnac is a wonderful cave. The hour-long tour left a great impression on us! 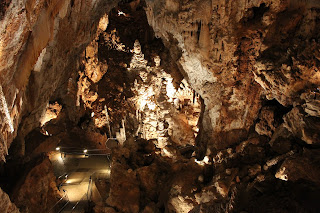 Closeby the cave there was a forest, the Bois de Païolive, with three different trails where we got amazing views. 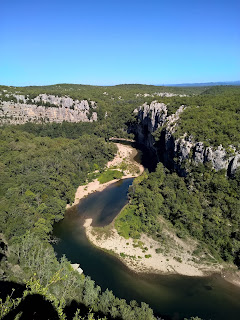 While Arles is a city you can get to by train, Vallon Pont d’Arc is not that easy. There is no train station so you have to take a train to somewhere closeby and then take a bus. Once you’re there it’s almost impossible to do anything without a car (according to my experiences): the campings are not that close to the city centre, the city centre is tiny (but very pleasant!) and the only thing you can do around there is kayaking. The kayaking centres are all not that far from the city centre, but to go there by foot it’s a bit too far. It might be possible to take a bus, but I didn’t pay attention to that. The largest touristic attraction of the city is the Pont d’Arc. Best way to get the best view? By car, of course. Since we had a car we went kayaking in Vallon Pont d’Arc and we visitied the Pont d’Arc. 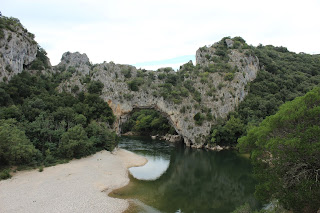 On our last day we visited the Cascade du Ray Pic, a waterfall. It was actually quite a disappointment because we had driven really far and all we got to see was this. It was certainly praised more in the travel books than it should have. 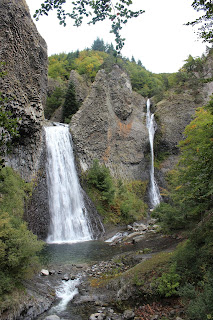 We spent our last evening in a restaurant which has the best ice cream desserts! Imagine a cheesecake made with cheesecake ice cream, a coconut bottom and a passion fruit collis. It’s even better than it sounds! 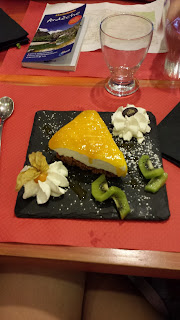 It took a while to write my road trip adventures down, but finally here they are! Have you ever made a road trip?